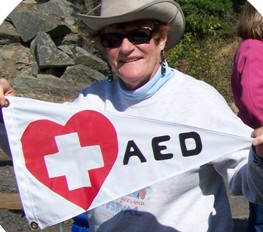 The San Juan Island Yacht Club had a cruise last weekend to Sucia Island.  A highpoint was a presentation by Fleet Surgeon Steve Enright regarding how boaters can minimize medical emergencies in remote waters.

He discussed the following:

He had an oxygen system and an AED which he demonstrated and several participants experimented with the oxygen.

Attached is the flag, that we have previously discussed with you, which will be flown on the boat containing an Oxygen system and an AED.  For more info, please contact Pam and Wally Gillette.